Call Us Find Us

Where saber-toothed tigers and other prehistoric animals roamed eight-to-ten million years ago, fossils were found from the Pleistocene or Ice Age and Native Americans settled in 200 B.C. The earliest know inhabitants were pre-Columbian mound builders, drawn by the Crystal River, which they called "Wewa-hi-I-aca" (clean or shining water), ideal climate, plus plentiful game and shellfish. They established a ceremonial and trade center that became one of the longest, continuously occupied sites in Florida--from 200 B.C. to 1400 A.D. Each year an estimated 7,500 Indians traveled to the Crystal River site to bury their dead and exchange ritual objects. These were Citrus County's first tourists.

A Florida state park, six-mound complex that is the largest of the Deptford Period in the southeastern United States, is designated a National Historic Landmark. Visitors can take a trial through burial and temple mounds and shell middens. An unusual feature of the site are two upright ceremonial stones or "stelae," one with the likeness of a human head carved on its surface. The visitors center / museum displays artifacts excavated at the site and links this with other mound building groups. It is located one mile west of US 19, two miles north of Crystal River, on North Museum Point.

The next visitors were Spanish Conquistadors on their quest for gold. Hernando de Soto trekked through Indian territory in what is now Citrus County, in the summer of 1539. He went through the Floral City area, along the banks of Lake Tsala Apopka past Inverness and Hernando, the city that bears his name. Native American heritage is preserved today through names like Tsala Apopka "fish-eating place," Withlacoochee "little big river" and Istachatta "red man".

In recognition of the historical significance of De Soto's expedition through "La Florida," his suspected route is marked along existing highways. A De Soto Trail marker is located on US 44, just south of Inverness.

The Timucuan Indians DeSoto encountered were virtually eliminated by 1710, victims of white man's diseases and other misfortunes, thus paving the way for the Seminoles. This tribe was well established when the United States purchased Florida from Spain in 1821 and colonization began. The ensuing conflicts escalated into the Second Seminole Indian War, during 1835-1842. At the war's end Congress encouraged settlement by moving the Seminoles west and making generous land grants to would-be-settlers.

Named for Major Mark Cooper, the fort was built during the Second Seminole Indian War. It saw action in 1836 with the First Georgia Battalion of Volunteers, and served as an observation post and stopover until the war's end. Part of the palisade wall has been reconstructed and a battle reenactment is staged during Fort Cooper Days each April. A popular recreation site, the park is located on Lake Holathlikaha at 3100 South Old Floral City Road, in Inverness.

In 1851, David Levy Yulee began operating a thriving sugar plantation on the Homosassa River and soon became one of Florida's most important early figures. A pioneer in the citrus industry and railroad magnate, he built the first cross-Florida train line. He later became Florida's first United States Senator when the state joined the Union in 1845. As the Civil War loomed, he resigned from the senate to serve in the Congress of the Confederacy. During the war, his mill supplied sugar products to southern troops. In the spring of 1846, Union naval forces raided his plantation on Tiger Tail Island, ten miles from the mouth of the Homosassa River. His plantation house was burned, but the mill, which was located inland, was spared. It is now listed on the National Register of Historic Places. 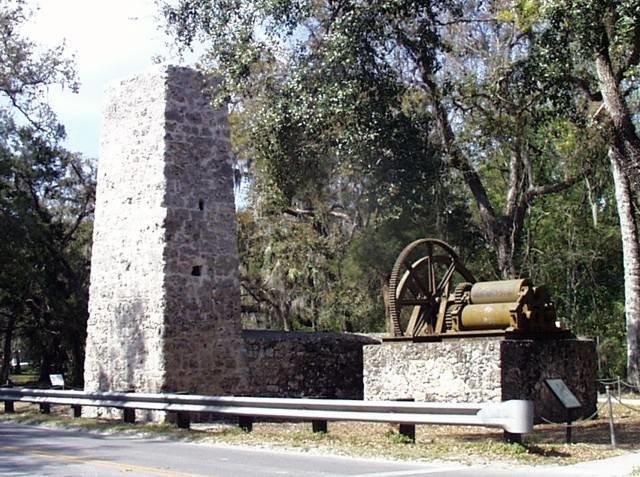 The remarkable, naturally preserved ruins at this Florida state park include original remains of the boiler, chimney and mill machinery. A series of plaques describes in step-by-step fashion the operation of the mill. It is located three miles off Highway 19, on State Road 490 / Yulee Drive, in Old Homosassa.

In 1887, Citrus became a county government set up temporarily in Mannfield until the citizens could vote on a county seat. Four years and four elections later, Inverness won a plurality of votes, but advocates of Mannfield claimed voter fraud. So in the middle of the night, as the story goes, the courthouse was "stolen". County records, furnishings, even the clerk who refused to go, were loaded on a wagon and moved. Inverness became the county seat and its largest city, with its name credited to a lonely Scotsman. Mannfield became a ghost town in the Withlacoochee State Forest.

This century old building was Inverness' first general store. When it moved from its original location in 1907, a second story was added and it reopened as a hotel. In 1925, it was moved and remodeled again. Its most recent renovation, with a British theme, opened in 1981, at 109 North Seminole Avenue, in Inverness.

The Plantation Inn and Golf Resort was built in 1962 along the banks of the pristine Crystal River. In 1975, W.W. Caruth Jr. purchased the property, impressed with its beautiful natural setting and Old South charm. Through a series of renovations and additions, including a major update in 1997, W.W. Caruth Jr's vision of a truly peaceful vacation retreat has been fully realized. 9301 West Fort Island Trail Crystal River.

Listed on the National Register of Historic Places, the courthouse is unique for its diagonal placement in the historic Courthouse Square. It is one of only 15 original ones remaining in Florida. The exterior restoration of the yellow brick, neoclassical building, including its copper-clad cupola and clock tower, has been completed. Interior restoration including the courtroom featured in the 1961 Elvis Presley film, "Follow That Dream," has also been completed. Visitors can see a portion of the Citrus County Historical Museum and Archives, housed in the building located on US 41, in Inverness.

This is a linear state park, part of the Florida Rails-to-Trails Program. The trail, paved with recycled rubber, follows the railroad's route into Inverness in the late 1800s. All that remains from past railroad activity are cement mileage and whistle markers, the Lake Henderson Trestle and the Inverness Depot built in 1892. The trail begins on North Apopka Avenue.

Even though a disastrous freeze in 1893-94 wiped out the area's citrus industry, its demise coincided with the discovery of phosphate. In Floral City the influx of mine workers reached "gold-rush" proportions. Its population grew from 300 (which at the time was more than that of Miami) to 10,000 (many of these were African-Americans). The phosphate boom lasted until World War I. Many sites from Floral City's heyday remain, including a magnificent avenue of oaks planted in 1884.

Forty-four historic sites and buildings are included in a self-guided tour of this district, listed on the National Register of Historic Places. During Floral City Heritage Days, the first weekend in December, the century-old oaks are lit and many of the buildings, dating from the 1880's to the 1920's are open to the public. Visitor information is available at the Gazebo located at Orange Avenue and The Withlacoochee State Trail.

This includes Pleasant Hill Baptist Church, built between 1895 and 1910, one of the oldest religious buildings for African-Americans in the county. African-American Frazier Cemetery, has graves dating to the early 1900's.

Crystal River grew from a small fishing village before the Civil War, to a center for milling cedar and cypress into pencils and other products. When the railroad arrived in the late 1880s, it expanded the lumbering industry, facilitating the export of fish and oysters. It brought in northern tourists, touching off a boom in the construction of hotels and inns. The 1920s saw a new type of visitor, the "snowbirds" retreating from harsh winters. One group from Michigan established its own colony, "Michigan Town," which exits today as a part of Crystal River.

The Eubanks Edwards House (c.1900) and several early rental cottages comprise a complex of antique and gift shops, art gallery and tearoom. The village is located at the intersection of Highway 19 and Citrus Avenue. 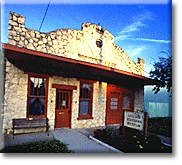 Exhibits in this 1939 native limerock building, which once housed the city hall, jail and fire department, include a replica of an original fish house facade and a diorama of the downtown area in 1927. "Historic Tour of Crystal River" guides are available at the museum and provide information on late 1800s residences, the early 1900 depot, 1920s commercial buildings and Michigan Town. The museum is located at 532 Citrus Avenue.

As early as 1875, Homosassa was heralded as a sportsman's paradise. News reports and guide books proclaimed there was "no place like it." It became a resort area for wealthy and prominent Americans - among them Grover Cleveland, Thomas Edison, John Jacob Astor and Winslow Homer. Baseball's "Dazzy" Vance and Babe Ruth were hoteliers here. The springs themselves became a popular tourist attraction, as turn-of-the-century trains stopped to let travelers watch the thousands of fresh and saltwater fish congregate in them.

Nearby is Heritage Village, a charming cluster of antique and gift shops in historic buildings, and Conversations Tea Room, which serves up a light lunch and gourmet teas on stained glass tables made in an artist零 loft that hangs above the dining room.

During the late 1800s, this was a private residence. In 1906, it became a fishing lodge, one of several still standing on the Homosassa River. Next door is the private Atlanta Fishing Club, founded in 1889. This lodge was restored as a restaurant in 1986 and is located at 11210 West Halls River Road, in Homosassa.

This present day Florida state park was known as Nature's Giant Fishbowl when the first observatory was constructed in the 1940s. Launching the current fishbowl in 1964 was a media event, as it slid down steel skids greased with bananas into the Spring of 10,000 Fish. The park was transferred from private to public ownership in 1984 and is dedicated to the preservation and rehabilitation of Florida's wildlife. Entry is through the visitors center and gift shop on U.S. Highway 19, in downtown Homosassa Springs.

This unique museum tells the story of printing from Gutenberg through the early 1900's. Old-time presses, in working order, galley trays and other vintage printing equipment are on display. Changing works by local artists complement exhibits of the printer's art. The museum is located at 10466 West Yulee Drive, across from the Yulee Sugar Mill Ruins Historic Site.

This page and all of the many pages about Citrus County Florida which we are offering you here on our site are meant to help you learn about our wonderful area. Where you build your new home is very important and we wish to provide you with as much information about the Citrus County Florida area as you need. If you have any additional questions or would like to know anything else about our area, please call us at 800-853-2363 and we would be more than happy to help you.